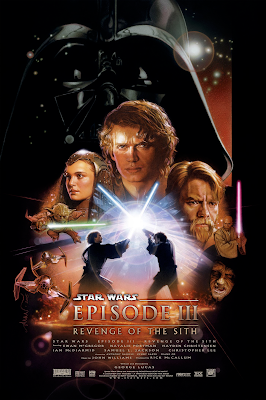 Exiting “Attack of the Clones” you might feel a little woozy and maybe even feel a little lost, and think to yourself, “is there any hope?” Well, as much as people might disagree with me, this entry in the “Star Wars” film universe if not only one of my favorites, but also one of the better shot, directed, and acting in the series as well. Let’s not stand on ceremony, let’s commence with 2005’s “Revenge of the Sith.”

“Sith” begins in the middle of a giant space battle with both Anakin Skywalker, now a full Jedi Knight, and his master, Obi-Wan Kenobi, hunting down General Grevious, the leader of the Droid Army who has kidnapped Chancellor Palpatine. After a daring rescue, Kenobi and Skywalker are met with a heroes welcome back on Coruscant.

The plot thickens as Anakin and Padme reunite and she reveals to him that she is pregnant, however visions of Padme dying during childbirth haunt Anakin who first seeks counsel with Jedi Master Yoda, and later with Palpatine who regales Skywalker with stories of the Dark Side of The Force and and Sith Lord named Darth Plagueis.

There is also worry within the Jedi ranks as Chancellor Palpatine looks to expand his power within the Senate. Many are worried they will need to remove the Chancellor after the Clone Wars has come to an end. Master Jedi Mace Windu and the Council decide that Anakin should keep tabs on Palpatine, who agrees with their plan, but remains conflicted on his loyalty to the Jedi, his friendship to Palpatine, and his worry for Padme.

As Kenobi dispatches of General Grievous on the planet Utapau, meanwhile on Coruscant, Palpatine reveals his true identity to Anakin as the Sith Lord, Dark Sidious, who promises that he can help Anakin save Padme.

After reporting his findings to Windu, a task force of Jedi, led by Windu, look to take Palpatine into custody and re-establish order. Arriving just in time, Skywalker tries to talk Windu into sparing the life of Palpatine, but before Windu can land the killing blow, Anakin cuts off Windu’s hand and allows Palpatine to land his own killing blow. Having saved the life of Palpatine, Skywalker pledges himself to the Chancellor and becomes his newest apprentice; Darth Vader.

It’s all downhill from here, as Jedi are wiped out with “Order 66,” Anakin kills what remains of the Trade Federation, and Obi-Wan and Anakin duel on the fiery planet of Mustafar. The 3rd act moves quick and ties up all loose ends and leads right into what we all know as “The Original Trilogy.”

As much as people give shit to the prequels, this is by far the strongest of the three, and for me at least, my 2nd favorite film in the series. I love the way the tension builds and seeing the descent into darkness for Anakin Skywalker as he finally turns to the Dark Side and becomes Darth Vader is a highlight of just not these films, but the franchise as a whole.

There certainly seem to be things that George Lucas learned from his previous mistakes in Episode I and II, including;

1. Keeping the love story almost completely out. While we still know that Anakin and Padme love each other and they are about to have kids, that story is told with less dialogue, which helps moves the action along.

2. He let’s the actors act this time. While Natalie Portman was pretty much a disaster in this film, a select few actually improved the material they were given, namely Ewan McGregor and albeit some silly faces, Ian McDiarmid, gives a creepy performance as the manipulator of all the events in the prequels. And let me not forget Christopher Lee, who is, well, Christopher Lee.

3. I buy Hayden Christensen this time. Hey, I mean he’s acting isn’t the best, but it’s head and shoulders much better than his performance in “Attack of the Clones” and his scowling is in full effect as the Dark Lord of the Sith.

All in all, there isn’t much I can tear apart in this film aside from some atrocious acting and of course the SFX porn that became a staple in the prequels, but honestly, “Revenge of the Sith” is entirely watchable and all together enjoyable. As someone who’s favorite in the franchise is “The Empire Strikes Back” this film does a great job of painting scenes that are full of darkness and impending doom, which for me, is when the series is at it’s best; dark and gloomy, with just enough light where you think there is hope; and that hope in the darkness for these prequels has to be “Revenge.”

Coming up next in Part IV will we go back in time, but fast-forwarding ahead about 20 years in “Star Wars” time with “A New Hope,” May the Force Be With You.