Never has a movie pissed me off more. I mean wtf is going on here? Every element from 96’s ID4 is horrifically whored out like the little slut it apparently is. Listen I get ID4 is not perfect as some people make it out to be, but it was a good summer film that I thought was honestly pure fun. A sequel was never needed. But if it was to become a reality this is far from it. Resurgence is a mess it simply is a thrown together money grabber like Sony is doing with Ghostbusters. There is no reason for any of these films to be made but for greed little shits to make money. This new ID4.2 world is a overblown CG shit feast of a futuristic 2016 that does nothing but make me cringe the entire time.

This whole this is just sad. Everything about this is disgustingly sad. 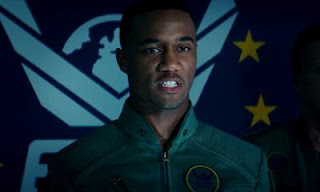 Dylan Hiller (Hiller’s son) who is played as a complete douche by Jessie T. Usher is back but in the place of his father. Will Smith didn’t want to come back and I fully understand why. The thing about him being thrown into his fathers role is that even though Dylan hasn’t done anything worthy, for some reason he gets to ride his fathers coattails and is placed on the same pedestal. What the hell has he done himself?! Oh and the fact that Will Smith dies during a Test-flight makes the hero Hiller more like a zero. It would of been better if he ate a bullet because he couldn’t take the fame and nightmares anymore. Or maybe because he saw this train wreck. Dylan Hiller is one annoying ass character.

Thor’s brother can’t lead a movie to save is life. He has no charisma. His acting is fine but the dude just can not hold a film on his own. His dialogue also makes him another annoying character in a already bloat annoying character film. Why this character is even here is a mystery to all. Thou he does make a lot of stupid faces which made the film a bit more enjoyable…a bit more. 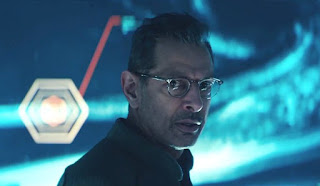 Goldblum is back! He’s playing the same character as before, just for some reason seems to be a lot smarter now. I mean he was a smart dude before but in this movie he just guesses everything and it’s always completely right. There is like 5 times where everyone is like, “What is this…”. Goldblum just pops in with the right answer out of the blue. The writers did a poor job on this film. Goldblum being brought back was a way to make their job easier to explain and keep plot-holes from manifesting.

Goldblum’s dad is back, he does nothing but put a whole school bus of kids in danger of being brutally killed. Yep that’s it. Seriously watch the movie, he does nothing. 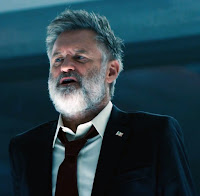 President Bill Pullman is back and…Makes another speech. You know it worked before, but this one is very forced, like rape. Plus his voice was all over the place I’m not sure what happened there and he takes a place of another character from the first ID4. (One that is already dead) Again he’s thrown in because its a sequel! So lets throw Vivica Fox in as well. Who is not a stripper anymore, she a doctor! Good for her and her douche son.
The ending is pretty much the same as the first one, killing the aliens and hugging in a desert. I must say this was one of the laziest movies I’ve seen in years. Guess what? The ending is setup for a sequel. Yep and boy will you be amazed with this ending.

All and all this movie did nothing. Really it is the direct to VHS blockbuster shit version of 96’s ID4. It was utter trash.