2015 brought about the resurgence of a franchise literally dragging itself out of the fiery pits of Mustafar. “The Force Awakens” was a worldwide phenomenon; it bridged the gap between successful animated fare like “The Clone Wars” and “Rebels” and washed the taste out of the mouths of fans still angry and beating their plastic lightsabers on the dead horse that were the Star Wars prequels. Since the Lucasfilm/Disney purchase that was so highly touted/publicized/argued, everything has been coming roses for the Star Wars Universe and its fans. Plus, now anything that can be Star Wars, IS Star Wars. Pet clothing, lawnmowers, coffee pots, I”m sure there are even Star Wars-themed Fleshlights out there. I mean come on, one can dream, can’t they?

My point is that Star Wars has taken over again. Add in the Marvel Cinematic Universe, and Disney is literally printing money with pictures of Mickey Mouse on it, hey, in a couple of years, the way we are going, that might end up being a legit form of currency.

Oh it’s a great time to be alive if you’re a fanboy of fangirl.

With all the success that Star Wars has had since it came out of the wilderness following the perceived failure that were the prequel films, there are many that wondered; “When will they slip up?” Much like the MCU, there have been many films where people though the shine was coming off, “Iron Man 3,” “Thor: The Dark World,” and even “Ant-Man” were films that many can point to where the chinks in the armor were starting to show. And unlike “Star Wars” this was bound to happen with Marvel when introducing characters that were so fringe that it’s almost impossible to find a captive audience, of course “Guardians of the Galaxy” is the exception and not the rule.

This brings me to “Rogue One: A Star Wars Story” the first in what is bound to be many stories, and the 2nd film in the “One-Star-Wars-Film-A-Year-Until-The-Day-We-Die” series. Of course that might sound a little snarky, but in this day and age if you aren’t snarky you aren’t a member of this horrible, horrible Internet that was been created.

So was “Rogue One” good? Yes……and no. As a “Star Wars” fan, of course I loved this film. It finally brought the “War” to “Star Wars.” Sure, you get to see “The Clone Wars” in the “Prequel-that-won’t-be-named,” and who really wants to relive that….

The premise is simple. A band of bad-ass ruffnecks are tasked with stealing the plans to a planet-destroying weapon and thwarting an evil army. It’s really as simple as that, The only difference between this film and any other action or sci-fi film that has the same exact plot is that it takes place in the Star Wars Universe. I know….it sounds bad to equate it that simply, but that is exactly what we have here. If this was any other film franchise people would be bashing this film into the ground, but since it’s the holy grail of science fiction mythology, the literal scared cow of cinema, the bashing will be light by most reviewers.

With the finished product that is “Rogue One” we can see why the production might have been a little troubled. This is a dark film; this is a war film, and coming off “The Force Awakens” you can see where they tried to lighten the mood with some cameo appearances that I won’t spoil, the gallows humor of K-2SO helps, but nonetheless, this is still a dark film that of course brings up the comparison to “The Empire Strikes Back,” which in the scheme of things, chronologically, works very well for the canon where you have “A New Hope” now book-ended by two very dark entries.

One of my biggest gripes, and this is similar to a gripe that I have with the MCU as well, is the need for audiences to know EVERYTHING about the universe in order to grasp all the intricacies and “wink-wink nod-nod” moments that fans will love, while casual fans will be left out in the cold. I understand that you have to include fan service, but “Rogue One” is the victim of too much fan service without providing an explanation to crucial plot points. One of the biggest is the use of Kyber Crystals and why they are so important to the universe. Never once, in the history of the FILM universe have Kyber Crystals been spoken about, unless I’m mistaken. Yes, I know, they are used to power a Jedi or Sith’s lightsaber. I know that because I KNOW “Star Wars” and do the research. But this is explained more in the prequel book to “Rogue One,” “Catalyst” where Kyber Crystals are explained to a larger degree and how they do more then just power lightsabers. 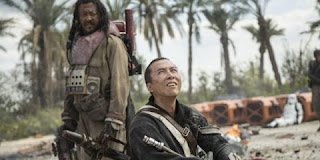 Characterization was also lacking for the most part. We see glimpses of motivations for characters like Jyn Erso (Felicity Jones) and Cassian Andor (Diego Luna), and the duo of Chirrut Imwe and Baze Malbus (who I would LOVE to see a Star Wars Story about them) are my highlights. But in a film where you pretty much know the end result, I assume this was done on purpose because, SPOILER ALERT, a lot of people don’t make it. With that, to truly understand the motivation for these characters is pretty inconsequential, but that to me, is also a shortcoming of “Rogue One.”

Even with the run-time being two hours and 15 minutes, there were plenty of times where the action could have been dialed back, and we could have gotten to know these characters a little better. Gareth Edwards knows how to do a lot with a little, “Monsters” is a great example of how he was able to generate tension without having to show anything, but with “Rogue One,” he chose to go the route of “let’s blow up a lot of shit” instead of getting intimate with his wonderful characters. Maybe he felt like he was only going to be able to play in this sandbox once so it was balls-to-the-wall, which is understandable, and I might be in the minority of the person liking bigger and better booms and out-of-this-world CG, but characters come first, especially for a film universe that prides itself on it’s mythology.

Overall, for being the first “Star Wars Story” this is a worthy effort despite it’s flaws. This is a Star Wars film for fans, made by fans, and that might be one of the biggest issues. Even with the oversight of Disney, I think the inmates ran the asylum a little too much in “Rogue One” and caused this film to feel disjointed, rushed, and wasted the chance to flesh out new characters and instead chose to do it with a different medium, namely a book and cartoon series, “Catalyst” and “The Clone Wars,” respectively. I can’t knock Disney for trying to tie in their collective mediums, shit, I’m sure there are tons of people buying the e-book or the hardback for “Catalyst” today or binge-watching “Clone Wars,” but I don’t like having to study for a test in order to understand a film as a whole.

I’ll likely give this film another shot in the theater, but unlike my seven screenings of “The Force Awakens” in the theater in 2015/2016, this will be so I can catch all the things I missed. I want to like “Rogue One,” but this was a tough film to get behind, even for the die-hard in me. “Rogue One” is the blueprint, which despite it’s flaws, is still very watchable and will make fans happy as we finally know what happened to the rebels that gave their lives to help the rebellion.