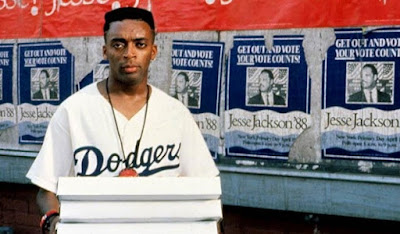 *The opinion of Matt does not necessarily coincide with the opinions of the rest of the crew of Simplistic Reviews.

This year will celebrate the 28th anniversary of the Spike Lee Joint, “Do The Right Thing.” But the question we always ask ourselves is, “What is the right thing?” Is there a “right” thing? And if there is a “right” thing, how does one make the decision on what the “right” thing is?

There’s no doubt that “Thing” was a film that happened at the right place at the right time, and while other films have tried to emulate the race divide and a sign of the times, see also Lee’s “Summer of Sam” for a look into the racial and cultural divide in 1970s New York, there still isn’t a film, for my money, that captures the anger, anxiety, and zeitgeist of a city sitting on a powder keg. Of course, art often imitates life, and in recent years with police shootings, gang violence, political discourse, and attacks on immigrants, minorities, and the LGBT community on the rise, we all live in uncertain times.

Oh, there is also the fact that we have a bullying, fear-mongering, divisive, reality-show starring megalomaniac about to take the Oath of Office as the 45th President of the United States, but don’t worry folks, go watch some foxes jumping in the snow (actually, that doesn’t sound like a bad idea).

Back to the point, in “Thing” the climax reaches a fever pitch when the character “Radio” Raheem is murdered by NYPD officers, a fire hose is turned again an angry mob and our “hero,” Mookie, played by Lee, throws a trash can through the window of local pizzeria, Sal’s Famous. A lot of anger is loaded into the final 15 minutes of the film, but it brings up the question; What is the “Right” thing?

This is an argument that I’ve gotten into with a lot of people. Personally, I’m always interested to hear what people think is the “right” thing. The biggest point of contention is always whether Mookie should have thrown the garbage can through the window of Sal’s Famous. While I understand why this might be a point to argue between people, I’m on the side of this being the “right” thing. Simply, it was rightful rage over the death of an innocent citizen by the “trusted” police force which forces another citizen to act in way that many may never understand how to act. Of course, in turn, this action also saves the lives of Sal and his sons, despite the fact that their business is destroyed by an angry mob. That’s the simple way to breakdown the climax of “Thing,” but there is much more leading to this choice. 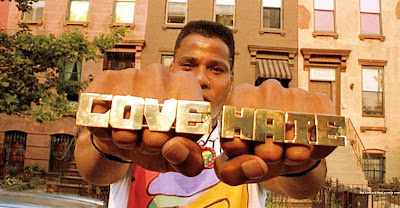 Other aspects of the story certainly play a big part in Mookie’s decision. The New York heat, Sal not paying Mookie before the day was up, being accused of being a dead-beat father, the constant harassment by Smiley, there are several aspects of the day that sets Mookie off, but the most reasonable is always going to be seeing “Radio” Raheem murdered in front of him by police who are tasked with upholding the law and having the CPR (Courtesy Professionalism Respect) on the side of their cruiser (the irony). It’s a layered argument that can be tossed back and forth, but the reason we still reference “Thing” as the movie that still commands our attention a quarter of a century after it’s release is the climate we live in currently.

Police still systematically target minorities which often ends in horrific results, and police are overworked with less officers on the ground to do the job correctly, not to mention the fact that many officers are ill-equipped to get the job done correctly. An overburdened and broken system leads to misjudgment and tragedies that will continue to happen.

Is violence the “right” thing…no….however, when you are kicked, prodded, marginalized, and made to feel that you have no rights as a citizen, what are you going to do? Throwing a TV through a window might be a start, but how about throwing your vote in a ballot box on a local level to make the immediate change that is needed to hopefully, at some point, make a bigger change.

Much was made when “Thing” was released, including comments that viewing this film would incite riots. Lee’s response was whether critics believed that minorities, namely African-American’s, were unable to control their impulses while viewing a work of fiction. It was a perfect response for people that just don’t get it, and will never get it. Hell, if “Thing” makes you angry, IT SHOULD! While it WAS a work of fiction it was still inspired by true events, namely the beating and murder of Michael Stewart by NYPD officers, and we are still seeing the endless deaths of African-Americans around the country, sadly at the hands of law enforcement officials. We should all be upset by this, while Lee is being a politician about it, he should have said “Yes, people should get upset about this film, it’s happening, this is the world we live in!”

So, what is the “right” thing? IS there a “right” thing? The “right” thing is to take tragedy and knowledge and apply it in a way that changes the course of your life, your country, and your politics. We are living in scary times, with people in charge that seem to like to “troll” the American people. We literally have an Internet troll who is poised to take the office of The President of the United States shortly. Think about that….someone who made his career firing the like of Lil John and Dennis Rodman from a fake job interview show is going to be hiring people to look after Civil Rights cases and reading the most classified of files, will be running our country for what could be up to eight years.

The “right” thing is to follow the mantra of Public Enemy and “Fight the Power.” But fighting the power is more than just with your fists. Fight with your empathy, fight with your courage, fight with your knowledge, shit, fight for your right to party, because if anything you always have the “right to fight.”

‘Run the Jewels’ Run a Marathon in Nashville