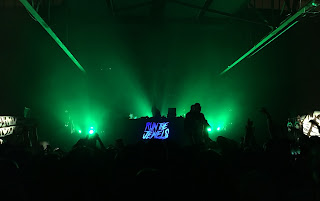 Some of the comments in this post will not behoove the irony of what they can be taken as, namely the fact that a well known hip-hop duo like Killer Mike and El-P, collectively, Run the Jewels, was widely attending by an all-white crowd.

This is not meant to be inflammatory at all, it’s just a very basic, and simplistic, observation where I was surrounded by a crowd of people that are my skin color. It makes me think of where hip-hop is going and is there an issue with the way shows like this are being advertised. Is it the pricing of the show, is it the venue, which ironically enough is located in a historically black neighborhood. It just made me think since it’s a paradox that hip-hop has had such a far-reaching effect on the Caucasian community who come out in droves to support artists.

Personally, I’ve always loved hip-hop from an early age; my first tape was “The Chronic,” which was confiscated by my parents despite the fact that they were the one’s that bought it for me, and my love for the genre grew over the years. Until about 2008, which to me so the death of hip-hop for many years. It was a wasteland of just bad music that coincidentally all sounded the same. So shit, on shit, on shit…it wasn’t “boom bap,” it was poop shit (yes, very grade-schooler of me). 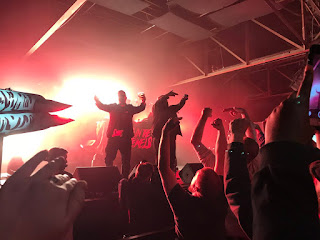 Luckily, more artists like Kendrick Lamar, Schoolboy Q, and Action Bronson have come along, as well as the return of A Tribe Called Quest and De La Soul, hip hop is on the upswing, somewhat, but nothing in my opinion matches the intensity of the super group of Killer Mike, known widely for his contributions to The Dungeon Family and Outkast, and El-P, producer supreme and one of the founders of Company Flow, who formed Run the Jewels back in 2013.

Overall, their performance at Nashville’s Marathon Music Works was a grand success. The crowd was into it, the vibe was communal, and the duo of El-P and Killer Mike is one that is tailor made for a road movie about two buddies, one having just broken up with his significant other, and the other wants to get him out of the slump. The two get along that well on stage that I would love to see them star in something together.

There were some low points to the show of course. While the openers were fine, including two DJs, Nick Hook and Gaslamp Killer, and two MCs, Cuz Lightyear and Gangsta Boo, the former a member of Three Six Mafia, the sets went on a little to longer, but that’s not discounting the effort that they put in for the crowd. The audio fidelity was also a little suspect at certain points of the show. Maybe the bass was just a little too much for the venue to handle. Add some extended feedback hi-jinks which had my ears ringing, and that was the short of the qualms I had with the show, which really isn’t that bad to be honest. 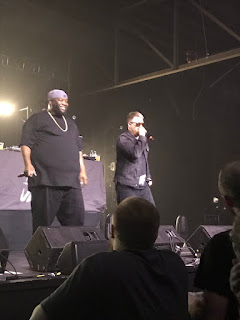 The show in it’s entirety ran nearly four hours, which is a lot of hip-hop to squeeze into one night, and Run the Jewels’ set went for what seemed nearly 90-minutes of high energy rhymes. However, while the verbal intercourse was something to behold, there was also the message that the group, namely El-P wanted to get across. It’s no surprise that El-P and Killer MIke aren’t fans of our incoming 45th President of the United States, and the crowd was clearly behind him. But there was also a message of peace and hope. El-P explained that it was amazing to see so many people out late on a Tuesday night for a Run the Jewels show. He also told the crowd to look around and see the types of people in the room. This was a community of people who were all there for a simple purpose; to enjoy an amazing show. A community of like-minded individuals. A community of neighbors. The main point is that we are all one community, no matter what walk of life we might come from. This heartfelt message was in stark comparison to the fact that he just called our incoming president a “c*nt” and a few other choice words, and he also joked about this getting out and the Trump tweet that would likely follow. It hasn’t just yet of course.

Overall, seeing a group like Run the Jewels is a treat for anyone. It features to luminaries of hip-hop at the top of their game, while acts like Drake or Migos or Future off nothing more tales of drugs, bougie broads, or elementary school raps, El-P and Killer Mike are offering a sampling of conscience rap with an injection of the surreal and that same braggadocios-style that has been a hallmark of hip-hop since LL Cool J exclaimed “I’m Bad!”

What Does it Mean to “Do The Right Thing”