What an age of wonder we continue to live in! Superheroes, Star Wars, Pixar, Marvel, *cough* dc *cough* and so much more. Every comic book, sci-fi, and fantasy nerd is living their wildest dreams with the arms-race continuing at a pace never before seen in modern pop culture. If you dream it, and there is a market for it, it will surely be adapted in some form or another. But are chinks starting to form in the armor of Netflix/Marvel/Disney’s after a pretty rough take on their latest hero, “Iron First.” 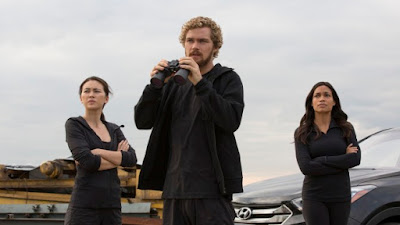 Full disclosure, I’ve yet to dive into the newest Netflix Marvel series, “Iron Fist,” but man, based on those reviews, which I normally take more serious then a fortuneteller in a strip mall next to the Chinese Take-Out, there has to be something to them, well, because there are so many bad ones.

But in comparing Season One of “Daredevil” that many people thought pretty much changed the game for Marvel, where are they starting to go wrong after it’s Second Season? Sure, “Jessica Jones” upped the storytelling and introduced the strongest female character that Marvel has put on the screen yet (sorry Black Widowers), but there has been a noticeable drop in consistency.

Perhaps the seasons are a little too long…for me. Some would argue they aren’t long enough, but 13 episodes, with maybe about six of the episodes being of substance and moving the plot along, 10 episodes seem like the way to go.

This brings me to “Luke Cage,’ currently the highest rated Marvel TV show, at least on Rotten Tomatoes, the “be all, end all” of Movie, TV, blah blah blah reviews. As a whole, the show is good. It takes on a lot of issues that scare conservatives and white people, and show that no matter what color you might be, corruption is universal. That might be reaching a little too deep into “Cage” but it does show the social climate of a predominate African-American neighborhood, and is no doubt the most politically charged of the TV MCU so far. 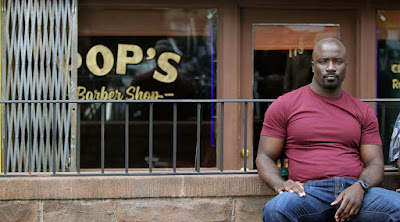 Mike Colter IS Luke Cage. He’s physically imposing, tender at times, but still a reluctant hero who thinks more about his situation than the events happening around him. He’s the anti-thesis to Daredevil in many senses. Whereas Matt Murdock seeks justice and protects his neighborhood, Luke stands on the sidelines and lets his native Harlem fall victim to elected officials and criminals. He knows what he has to do, but prefers to hide and let the neighborhood rip itself apart. Of course, as in most of these superhero origin stories, he sees the error of his ways and with the help of some well-written female characters, and of course the introduction of a villain that can tear his world apart, comes to his senses and decides to save the day.

Unlike “Daredevil” and “Jessica Jones,” this series also lacked an actual villain with a super-powered background. No mind-control or extreme ninja skills with an option to come back from the dead. It was, at first, a fight between a super-strong, yet reluctant hero, and a crime boss, and turned into a super-strong, now active hero, against a crime boss, but now a crime boss is in a super-suit. I do like the re-inclusion of the almost long forgotten Hammer Industries back into the MCU, and it re-opens the doors to maybe get Sam Rockwell back into the mix, which is always welcome.

With the positives, comes the negatives. I really wasn’t a fan of the final fight between Cage and the season’s big bad, Diamonback. It was underwhelming, there just wasn’t much there, and even though some people might think the build up was just enough to give the final fight some pathos, but just fell flat, just like many fights and bad guys in the MCU. To this date, Kilgrave, aka, The Purple Man, is the only villain that really comes to mind that posed a great threat, as well as it being the most personal and tragic.

And while this might make me a traitor to all of my musical sensibilities, considering I love Wu-Tang Clan, I really could have done without the Method Man “freestyle” about Luke Cage during a segment of Sway in the Morning. I don’t know, it seemed so forced and just kind of an out of nowhere element of the show. Now listen, I love Method Man and everything about Wu-Tang Clan, but….why? Why include a musical interlude about Luke Cage in the middle of an episode. No sir, I don’t like it.

Where they’ll go with Season Two of “Luke Cage,” I don’t really know, and will they go the route of releasing the next season before “The Defenders” is finally released, and will the less-than-favorable reviews of “Iron Fist” effect said “Defenders.” 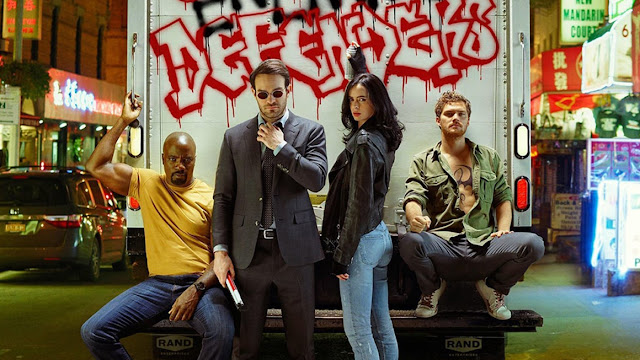 Sure, I haven’t gotten started on “Iron Fist” just yet, but I honestly do feel my enthusiasm waning for these more mature Marvel hero(ines). Yeah, it looks like Frank Castle will be returning sooner rather than later, but just like Roman Times, the crowd is fickle and will boo without mercy if they don’t like something. That, or in fact, “Iron Fist” really is that bad.

People also tell me “Hey, ‘Agents of SHIELD’ has gotten better.” Meh, I’m sure it’s fine, but first impressions are everything, and with the “Winter Solider Oki-Doke,” as I’ll call it, and a character who was as insufferable as Skye (who I also hear got better with time) I pretty much tuned out. I guess what I’m trying to say is that Marvel, TV-wise, has had it’s share of ups-and-downs, and ebbs-and-flows, and should be able to bounce back from a couple of sub-par, ie, not able to meet the lofty expectations of “fans,” outings lately.

What we all need to remember is that while we all waited with bated breath for these Marvel shows to come to Netflix, how high were the hopes for “Daredevil?” I’m sure a lot of people would raise their hands and yell out, “Oh, I knew the whole time!” Puh-lease! After the letdown that was Ben Affleck’s “Daredevil,” and the juggling of show-runners, will you honestly tell me without laughing that you had 100% confidence in Charlie Cox as Matt Murdock and the kid from the Mighty Ducks as his sidekick? You…are a liar.

We were spoiled with “Daredevil” and it ultimately lead to unrealistic notions that everything that Marvel would put on Netflix would be diamonds. This is their first lump of coal, according to “highly qualified” reviewers, but the real test will see how this effects future seasons and the chance that Marvel is willing to take on even more fringe characters. Personally, I’m waiting on Moon Knight, Marvel’s version of Batman pretty much, but it worries me now because of the backlash of “Iron Fist.” Thanks critics, this is why we can’t have nice things…