It would be putting it mildly that the expectations were out of this world for “Guardians of the Galaxy Vol 2.” James Gunn’s oddball superhero action comedy introduced fans of the MCU to a brand new type of hero and extended the storytelling into outer space. Sure, both “Thor” and “Thor: The Dark World” took us into the mythical world of Asgard, but the colorful landscape of deep space was something to behold. 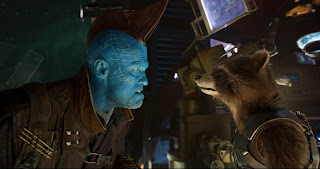 Take us three years to 2017 and Gunn is back at it again with “Vol. 2,” a flawed, but fun, sequel that is essentially a companion piece to the MCU as opposed to any type of film that progresses the overall story arc in the MCU. More importantly, it seems like the shackles were completely off of Gunn to create a film in the way that he sees fit, and that is where the film both shines, and trips over itself at times.

We meet our heroes back in 2014, fresh off the heels of their big victory against Ronan the Accuser and turning over the Power Stone to the Nova Corps on Xandar. This time they are helping the Sovereign protect some batteries from a giant tentacle monster. With their job complete, the Guardians receive their reward; the captured Nebula.

Of course, things go south quick and our heroes crash land on a lone planet and are greeted by a man names Ego, who tells Star Lord that he’s his father and wants to show him his birth rite. At this point our heroes part ways and the film gets the plot moving. 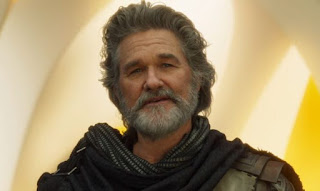 It’s difficult to put into words what’s wrong with this film without sounding like a cranky old man that doesn’t like cutesy Disney-like characters, the use, or overuse, of music, and a couple of jokes and scenes that are a little too self-indulgent. But I guess that’s what you get when you let an inmate run the asylum.

The biggest criticism from most people is that the sequel isn’t as good as the first one. Wow, what a criticism to make…the sequel isn’t as good. Hard hitting stuff. However, I have been pounding the drum in my perceived notion that there has been a recent dip in the quality of Marvel product. But this could also be my perception since the quality has been high for nearly decade, that is was inevitable that a few leaks would start to spring from the hull of the Titanic that is Marvel Studios.

I have to admit, during the title sequence of “Vol. 2” nearly took me out of the film. Unlike Chris Pratt’s trounce through Morag dancing and singing to “Come and Get Your Love,” the Baby Groot dance to “Mr. Blue Sky,” while the rest of the team is fighting a massive alien set the tone that I was going to be annoyed with cute antics. Pratt’s dance set the tone for fun and personally I rather see a REAL HUMAN character on screen than a computer generated creature pimped put to sell Pop! Vinyl figurines.

However, the film rebounded from that and turned into a pretty fun, stand-alone Marvel film. There is meditation on family and abandonment and the idea that the heart should drive you as opposed to your brain, and those themes were handled quite well considering all the boombastic action going on for about 80% of the film.

This brings me to one of the things I really liked, and that was Gunn’s freedom to pay homage to his friends on screen, namely Michael Rooker and his brother, Sean Gunn. The additional screen time and plot progression of Rooker’s Yondu, and Gunn’s Kraglin is something unexpected and a breathe of fresh air. Being close to the director is certainly a perk, but the way both Yondu and Kraglin are treated in “Vol. 2” is something a lot of studios with millions of dollars invested in a film wouldn’t allow to happen; make them a central part of the film. But low and behold, they are given much more screen time and are allowed to play pivotal roles, especially at the film’s climax. 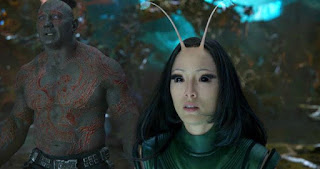 At the end of the day, these films are bulletproof. No matter the reviews or criticism, “Vol. 2” will make close to a billion dollars worldwide, and the Marvel juggernaut just keeps chugging along. In all fairness, however, it’s fair to openly criticize this film, because it’s not perfect, and has it’s flaws, but don’t criticize it just to criticize because overall, “Guardians of the Galaxy, Vol. 2,” is a harmless Summer blockbuster that is just another piece of the Marvel machine heading towards the inevitable “Infinity War,” and if anything, at least this film is proving that you don’t need to shoehorn things into a universe that is so bloated that at times it seems to be collapsing in on itself.

“Vol. 2” is the closest thing we’ve had to a stand-alone Marvel movie, thus far. No need for cute cameos or a character just passing by. For what it’s worth, I wouldn’t mind just seeing a “Guardians of the Galaxy” film universe. It’s ripe for the picking and there are plenty of things to cherry pick and create some fun films. Hell, a talking racoon and a tree are some of the most talked about characters in the MCU; who’d of thought they would be more beloved at this point than Iron Man or Captain America. People are looking for their heroes to be against the grain, and that is why “Black Panther,” for my money is going to blow people away, but tread carefully when giving the masses what they want, the disappointment could also be monumental and remember; with great power, comes great responsibility.

The Best of Armond White: (A Retrospective) Part Two

The Best of Armond White: (A Retrospective) Part Three