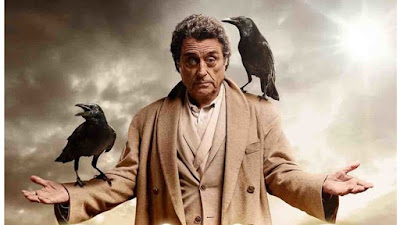 The higher the concept, the bigger the risk. That’s been the play for Starz for a while now, and most of those have ended abruptly. From ‘Camelot’ to ‘Da Vinci’s Demons,’ Starz hasn’t had the same success that networks like HBO and Showtime have had recently.

Sure, ‘Outlander’ has been a success, and ‘Black Sails’ ran it’s course, but Starz has always lacked that one show that would make people coming back to the network season after season, ala, ‘Game of Thrones’, and perhaps they’ve found that one show in ‘American Gods.’
Spearheaded by Bryan Fuller and Michael Green with Neil Gaiman serving as Executive Producer, there are some heavy hitters involved in ‘Gods,’ but can and will it be enough to actually save the series and allow it to continue even after a relative cliffhanger to end the first season.

The long and short of ‘Gods’ can be as complicated or as simple as you want it to be. Simply, we follow a just paroled man named Shadow Moon get involved in things far beyond his comprehension that involved Old Gods, New Gods, and other mythological beings. Add in a powerful revenant from beyond the grave and trippy flashbacks, and you have ‘Gods’ in a nutshell.

If you look at the series numbers, they dropped week after week, which is never really a good thing, but considering the high productive value and the high concept, you have to believe that Starz has big plans, and high hopes for the show that could be their own water cooler show.

What ‘Gods’ has going for it are a couple of things. One is certainly the shock factor of seeing some truly crazy things, ie, women swallowing people with their vaginas, genie fellatio, and even a game of checkers, it gets really wild. The second, and third, biggest things are the visuals and the story composition of each episode that includes visuals out of a Tarsem Singh film mixed with the work of Clive Barker and even Jim Henson. Most episodes begin with a flashback that usually preludes the actual content in said episode and introduces us to a new character, new superstition, or new religious belief. These are some of the strongest aspects of the show, if you’re into the folklore element of the show. This is where the divergence can stem.

A show that is so reliant of flashbacks and exposition can really drag a show into the muck and perhaps that is why the ratings steadily declined week to week. Shows like ‘Game of Thrones’ usually always had forward momentum even with the large amount of characters to juggle. The characters in ‘Gods’ are pretty minimal, yet there is a lot of exposition to deal with and with a limited amount of episodes in season one, there are only eight, the start and stop aspect can be hard to deal with at times.

However, this doesn’t mean ‘Gods’ isn’t interesting, in fact, it’s very interesting and I’d love to see where it goes from here, especially being a non-book reader and from what I’ve heard, there are a great deal of divergent stories and a ton of extra stories to be told. The good thing about a show that deals with mythology and theology is that there are 1000s of years to draw from and 100s of religion and belief structures to draw inspiration.

The fact that we actually had a show created out of the vivd and lush dreamscapes of Neil Gaiman is a miracle. ‘Sandman’ has been stuck in development hell for the longest, and will likely continue to be, and I’m sure the relative success of ‘Preacher’ last year over at AMC helped in getting ‘Gods’ green-lit and put into production. But the question will be; how long of a leash will Starz give these ‘Gods,’ and can it go the distance in giving the definitive version of one Gaiman’s best works to date.

The Best of Armond White: (A Retrospective) Part Four