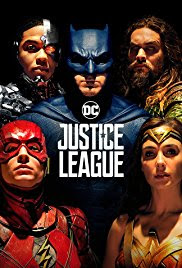 In case you haven’t heard, the Internet hasn’t been too kind to DC’s latest outing where you get to see their greatest heroes all join forces to defeat a bad guy who isn’t Darkseid. Sure, there are tons of problems with “Justice League.” Overall, it’s a rushed mess with trite dialogue, awkward performances, a main villain that makes Malekith from “Thor: The Dark World” look good, and it just feels rushed. But that’s what the DCU has felt from the start; a rushed attempt to catch up to the MCU.

But here’s the thing; is “Justice League” all that bad? Of course if you ask the Internet in it’s infinite wisdom is bad and they just can’t get past how bad the CG was on Henry Cavill’s magic mustache removal. Yes, it’s not good, it’s almost criminal that in a 300+ Million Dollar tentpole blockbuster that someone would sign off on that actually being passable in this day and age. Of course I’m not an artist of any kind and I have no idea how had it is to digitally remove a mustache, but for the past 27 years we’ve been able to make dinosaurs come back to life, create liquid metal terminators, de-age actors, bring them back to life, but somehow, facial hair removal eludes us. Go figure.

To to uninformed, here’s the gist of “Justice League.”

The world is still in mourning over the loss of Superman, and a new threat has arrived; Parademons and their leader, Steppenwolf who is after three Mother Boxes, which are essentially terra-forming alien technology kind of similar to the World Engine in “Man of Steel.” If all three Mother Boxes are found and combined they will essentially bring about the end of Earth as we know it.

So it’s up to Batman to form a team to save the world, but it’s going to take a lot more than a really fast guy, a head on a robot’s body, a powerful Amazonian, a drunk lifeguard, and a guy dressed in black rubber to save the world, they need Superman back. The only problem is that he’s buried in Smallville, Kansas. Good thing there is still a good amount of Kryptonian technology sitting around Metropolis.

If you’re a fan of the “Justice League” or “Justice League Unlimited” cartoon series, you’ll likely be a big fan of this version of “Justice League.” But in a world that’s been created to be dark, humorless, and void of a general sense of right and wrong, it’s odd that we have so many moments that are supposed to be funny and genuine. Why am I supposed to care if these characters like each other? I barely know them, and they barely know each other. It’s hard to buy into that as a viewer since there is very little frame of reference and not much history. But, you’re expected to buy into it.

However, one of the biggest issues overall with “Justice League” is the tonal difference between what we see directed by Zack Snyder and what’s directed by Joss Whedon after he took over for Snyder. Whedon does his best to create an Avengers-like vibe, and you could argue that some scenes are directly cribbed from his superhero Magnum Opus. I’ve never been a Snyder fan aside from just one of his films, but at least his style has been consistent with “Man of Steel” and “Batman v Superman” and just knowing that you’re watching the work of two different directors within the same film is quite infuriating for me. Whedon should have at least tried to keep the same tonal approach as Snyder instead of trying to reinvent a MCU film in DC’s backyard. But hey, that’s just like, my opinion man.

Surprisingly, Batman is actually one of the worst things about “Justice League” with Steppenwolf coming in a close 2nd thanks to more shoddy CG. I gave Ben Affleck the benefit of the doubt in “BvS” it’s his first time out and he’s doing the best he can, but this time around, he’s kind of just going through the motions and I don’t know how you make Bruce Wayne/Batman uninteresting, but Affleck did it, and it might be the reason why he’s potentially on the way out of the DCU.

I know i’ve spent a lot of time harding on things I don’t really like with “Justice League” but looking back at my experience, despite my eye rolls and scoffs, this might be DC’s most complete film to date. It hits all the right tropes, doesn’t diminish what was created in “Wonder Woman,” introduces The Flash who isn’t half-bad, and actually makes Superman/Clark Kent more like the Superman/Clark Kent that people might recognize.

So despite a slow start, can “Justice League” bounce back after a poor start? At the box office, probably not, but on the bright side, the US Box Office is about as useless as a screen door on a submarine, it’s all about the Foreign Box Office. But could a Snyder cut, or can a 2nd viewing show a film that is actually better than it really is? Perhaps, but please fix Superman’s lip…he deserves better.